One of the most iconic pictures of a Black woman doing what she does best, with a simple glance letting you know she has the time and is not one to mess with because she will always stand and fight for the rights of her people, is Gloria Richardson giving the illest side eye while pushing a National Guard’s bayonet away. 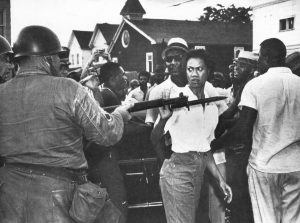 Richardson is a Howard alumni from East Shore, Maryland, more specifically Cambridge, Maryland, where she became heavily involved in the Civil Rights movement after her daughter joined The Student Nonviolent Coordinating Committee (SNCC). Initially Richardson, coming from a family well established in town, wasn’t very involved, rather she was watching. But as the young members of SNCC took on the civil rights battle cry and a step further than the more planned marches of Martin Luther King, their commitment to heavily almost daily protesting for desegregation, pushed Richardson to get involved.

Shall we take a minute to think about that in the context of today? 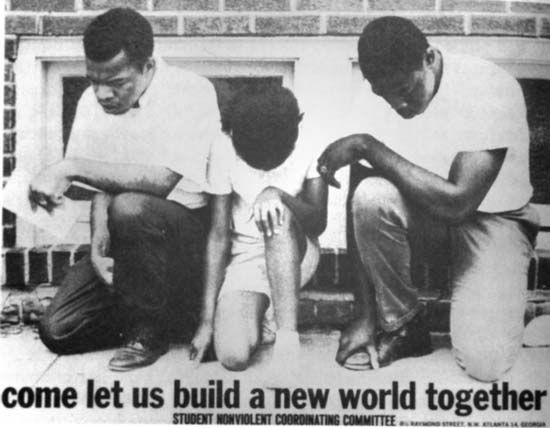 Because of the protesting the National Guard came into Cambridge and after eighteen months, in support of SNCC, Richardson along with other parents formed the SNCC adjacent group, the Cambridge Movement. Partially motivated NAACP’s lack of effectiveness in the town. The Cambridge Movement is most notable for being one of the first civil rights group to take head on the fight for economic equality and social justice helping to spearhead the evolution of the civil rights movement into the Black Power era. 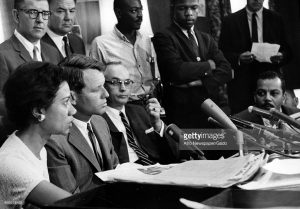 Richardson helped to broker the Treaty of Cambridge with US Attorney General Robert Kennedy and the Department of Justice. Richardson got the federal government to agree to five demands including “desegregate the hospital, course desegregate the schools and the buses, provide new housing”.

Then came the August 1963 landmark March on Washington, where Martin Luther King gave his impassioned I Have a Dream Speech but also where Black women were almost entirely erased from the the main stage of the march. Daisy Bates, the organizer of the Little Rock Nine, was the only woman to speak for a little over a minute pledging that:

“Rosa Gragg, vice president; Dorothy Height, the National Council of Negro Women; the Delta Sigma Theta Sorority; the Methodist Church women—all the women, to joining hands with Martin Luther King and all those fighting for civil liberties. “We will kneel-in, we will sit-in, until we can eat in any corner in the United States. We will walk until we are free, until we can walk to any school and take our children to any school in the United States. And we will sit-in, and we will kneel-in, and we will lie-in, if necessary, until every Negro in America can vote. This we pledge you, the women of America.”

Though initially there were no women slated to speak, several women were added as a nod to Black women freedom fighters after Anna Arnold Hedgeman insisted women be added. Rosa Parks, Mrs. Myrlie Evers, Bates, and Gloria Richardson along with a few others were listed in the end up the program. Only Daisy Bates spoke. Though Richardson was handed the mic, it was promptly taken away. Her along with Lena Horne were put in a taxi back to the hotel, being told it was for their own protection because the stage was crowded. They did not even have the opportunity to see King’s speech.

To get to this iconic side eye. What do you read it as her thinking?

The picture comes from May 1964 back in Cambridge, Maryland where Richardson along with the Cambridge Movement are protesting the super bigly bigoted Alabama governor George Wallace’s visit to Cambridge. The National Guard, were still stationed in Cambridge attempting to forcefully keep demonstrations and protests from happening. Richardson recounts that the were tear gassed out of a building rushing into the street and a National Guard came charging at her with his bayonet. 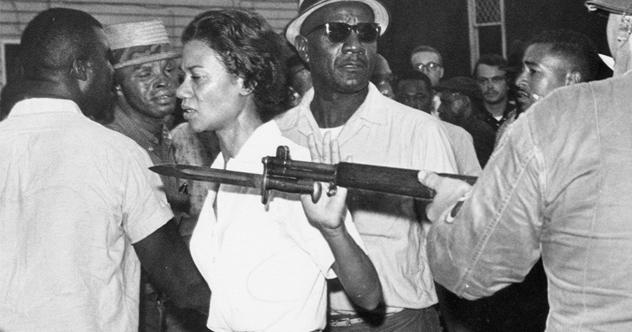 And there you have it, a look every black woman so deeply understands and a woman who fought so mercilessly for her community. I encourage you to look up the interviews Gloria Richardson has done with Democracy Now!, The Library of Congress, and various colleges + universities. The history of partnership between the The Student Nonviolent Coordinating Committee and the Cambridge Nonviolent Action Committee or Cambridge Movement in parallel and other times perpendicular to Martin Luther King and crew, the NAACP and the Nation of Islam. 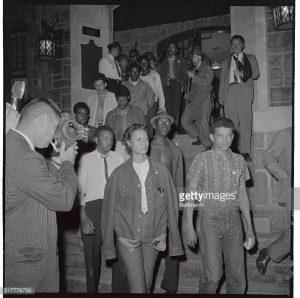 Remember that although we tend to look up history with rose colored glasses of everyone who helped for a similar mission that achieved greater good was the best of buddies and the schisms we see today are of something only of this generation. But there is beauty in seeing some of the same natural human affiliations and chasms not stop a movement from becoming something that redefined society and culture at large. So you can understand the power in your role and that through great effort change does come.

We just have to keep fighting for the greater good.

Thank you to the OG #SmartBrownGirl Gloria Richardson.