Ava Duvernay’s talent is unmistakable. 13th (released on Netflix) is a beautifully depressing historical look at the criminalization of Black people in America, which holds 1/4th of the incarcerated population in the world.

13th is absolutely heavy, almost a reverse catharsis. Part of me is deeply relieved that a Black woman came through and did what Tariq could never do with the ahistorical poisonous kool aid that is Hidden Colors. The other part is deeply pained that even though I knew this history, the weight of it all still sits like a boulder in the pathway of my community’s ability to become truly free.

13th looks at an ambiguity in the 13th Amendment that has taken us out of the shackles of slavery into the shackles of mass incarceration. 30 minutes in and the amount of information that has been thrown at you with wide panning beautifully shot interviews of historians, writers and activists, is overwhelming.

I’ve really had it on my to do list for forever and a day to do a video on Andrew Johnson, the Criminalization of Black Folk and the Rise of the American Police System, still might —- but for now I can just go tell you to watch 13th, as they cover how post-Civil War we see laws created to police the poor and really to criminalize Black folks. Laws that exist in many counties today. Vagrancy makes homelessness illegal. Loitering restricting one’s right to just stand around, literally, for standing in one space, you could be breaking a law.

The after effects and animation in the film really coalesce the narrative of the documentary when like ants you see a slick animation showing how Blacks migrated north to escape the white terrorism they were facing in the South. 13th really delves step by step into over 150 years of history in two hours and hits almost every node.

Michelle Alexander is heavily featured, the author of the New Jim Crow and great read though the Audible version is recommended for this long read. Before watching I assumed that a lot of the documentary research would center around Alexander’s work, all of which is very male centered. It is a fair critique of 13th to question the erasure of  Black women and teens from the conversation around mass incarceration.Angela Davis was interviewed and the value of her legacy can not be understated. Otherwise, we are often deduced to the weeping mothers and grandmothers, no consideration given to the how the school to prison pipeline impacts Black girls. Whereas there was a gender neutral tone throughout the bulk of the documentary, the last thirty minutes or so,  focused on wrapping up present day problems with the criminal justice and prison systems, becoming very male-centered. 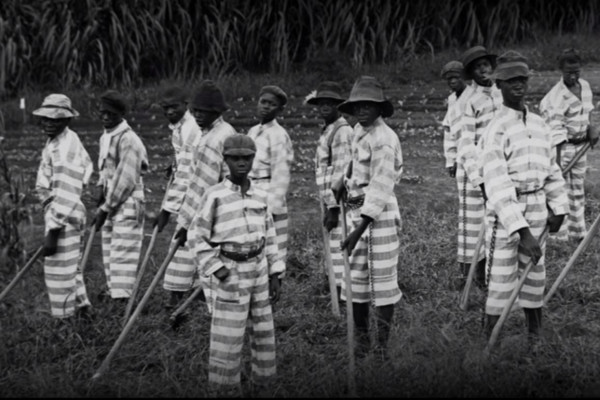 Who is this new Newt Gingrich? Newton whatchu’ been doing? We cannot give Newt too much of a pass, but the candor of his interviews around race and systematic racism in America was surprising. Anyone who has watches 13th, will walk away most mad as hell about ALEC.  ALEC is a conservative organization that works heavily with GOP Republican politicians (and AT&T as of late). ALEC did NOT wrote the Crime Bill. Let us not be took quick to spread misinformation because we just got a bit of enraging new information. ALEC has absolutely had a hand in state crime laws that buoy the prison industrial complex industry. Do you know who your Senators and House Representatives are? Please care about that and when their elections are…cause most of us living in the Southern United States with some of the most right leaning conservative state governments are getting got by ALEC and dimwitted politicians in general.

My biggest critique of 13th was the kiddie glove treatment given to Congressman Charles Rangel who has represented various districts that constitute Harlem and the South Bronx since 1971. They managed to get Rangel to admit that he and other leaders in the Black community advocated and the supported the 1994 Crime Bill that devastated the Black community and lead to the surge of mass incarceration. The documentary quickly moved on from Rangel’s admission into the slippery slope that plays into the current climate of squarely pointing the finger at Hillary Clinton for supporting the crime bill. There is room for interpretation, in that either the documentary was suggesting we have to stay invested in our political system (ie: voting the midterm and local elections) because politicians cannot be trusted to care for our needs with accountability. Or that this entire system needs to be dismantled and we say eff the system, I ain’t supporting Killary.

13th hints very quickly at what the climate was in 1994. Black community leaders were calling for something to be done about the high crime rate, that absolutely was precipitated by the systematic disenfranchisement of Black communities through the lack of infrastructure, social services, education, jobs and housing, all things thoroughly stripped down in the Reagan era. However there is no mention that our current vice president and Obama-bro Joe Biden wrote the Crime Bill.

We cannot deny that there was a violent crime problem in the late 80s/early 90s, addressing that would have been better served by discussing how the stripping of social services, a maneuver that started under the Nixon presidency and was heralded by Ronald Reagan or the broken windows policy that flourished in NYC under the mayorship of Ed Koch, devastated Black communities and laid the foundation for violence to surge. Some of the notes were briefly alluded to. It is likely in the name of not being partisan or a ploy in this years heated election and out of respect for the work of Rangle, 13th purposefully maneuvered into an equivocal narrative voice here.

If you are interested in exploring more on this topic and there is much more to dig into, you can began with the works of many of the voices featured in 13th.

You can watch Ava Duvernay’s 13th on Netflix.