Let’s delve into another complex discussion within the African Diaspora.

Africans selling their own people, us — into slavery. And do African Americans, Afro-Caribbeans, any of the modern day descendants of enslaved Africans in the Americas, have the right to hold modern day Africans accountable?

I’ve seen this sentiment bubbling over on Twitter and certain corners of YouTube, typically used to defend xenophobic sentiments African Americans are pushing against African immigrants in America. It is worth interrogating this sentiment.

First, because the reaction to this video derailed so quickly as people were upset that I called out African Americans for being xenophobic. To be clear I do not accept xenophobia for anybody. Your being called akata or bootyscratcher does not give you the right to feed into discriminatory sentiments that are entire waste of energy as they attack other oppressed people while ignoring the white supremacist system at play here. As an African American who loves my culture and my people, I will continue to encourage people to celebrate my and their culture by being knowledgeable and respectful to all.

I understand that African Americans do not have a sacred space for our culture and there is much resentment as we watch others co-opt our culture while keeping us out of theirs. That is a discussion to be had — but that is not the topic we are discussing today, we well get there soon. The point is to tackle one topic at a time to encourage a critical dialogue that encourages us to think a little deeper, be a bit more aware and understand that liberation does not come through power over others.

It is estimate that 12.5 million Africans were kidnapped and shipped during the Trans-Atlantic Slave Trade with about 10.5 million actually surviving the Middle Passage. It’s important to distinguish this as the Trans-Atlantic Slave trade, in that European colonizers were the orchestrators of this era of slavery because slavery historically has been going on in various iterations globally up into the modern day. The concept of enslaving people was not new to the various nations of West Africa before the white man arrived on their coasts. The conquest for power often comes through war and conquering. Historically it has been noted that there were some forms of slavery prior to the era we are referring to but it was often used as a tool of punishment and people were not being put on boats to be shipped across the Atlantic.

It is not unfair nor unfactual to note that “Africans” kidnapped and enslaved other Africans. That the European colonizers were not the ones doing the initial kidnapping, but rather purchasing bodies to be resold from other Africans. But where we all fail is thinking of slavery – specifically the Trans-Atlantic Slave Trade – as though it happened in a vacuum, where only one side reaped the tortuous consequences, while the other plundered and reaped the power and wealth.

First, we have to understand who were the Africans doing the kidnapping. As I said, enslavement has been happening in various iterations throughout lands, societies, countries for forever. It is a part of how nations heighten their power. So is not African individuals, it is warring tribes overtaking other tribes. The advent of slavery being a very profitable economic ecosystem that buoyed private wealth with the arrival of Europeans, pushed these kidnappings into a matter of survival – take or be taken. The totality of the Trans-Atlantic slave trade greatly disrupted entire kingdoms and tribes. Everyone that was kidnapped did not make it onto a slave ship. People migrated to avoid capturing, ethnic groups coalesced into each other to build more solid defenses against being kidnapped into slavery. Kidnapped peoples repatriated, whether they escaped the slave castles in Africa and settled on whatever land they could get to or they came back on Marcus Garvey’s boat — the over 300 years of the trans-atlantic slave trade – saw over 300 years of repatriation from enslaved peoples. 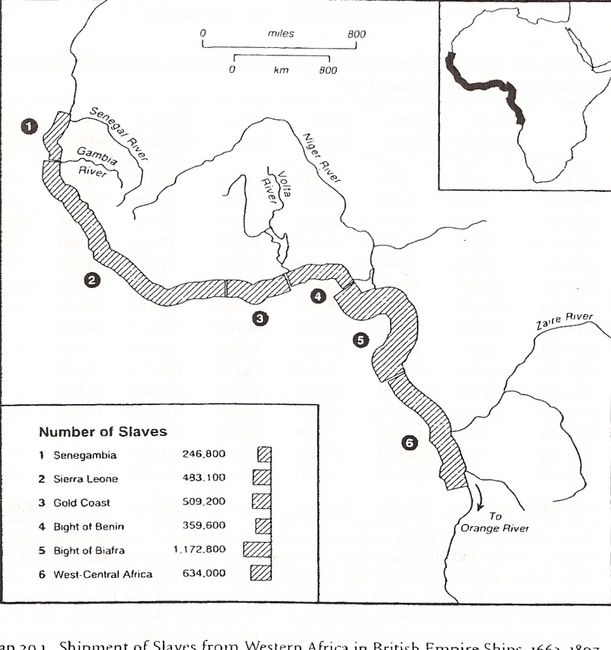 Then you have to consider that 300 years of slave trade was before country lines were drawn by the colonizers in the 1860s. Slaves weren’t simply kidnapped from Nigeria they were taken from the Bight of Benin (now parts of modern day Ghana, Benin, Togo and Nigeria) or the Bight of Biafra (now parts of modern day Nigeria and Cameroon). To complicate even further there’s regions like the Pepper Coast that’s now modern day Liberia and part of Sierra Leone — both moderns nations founded by Western colonizers allowing former slaves to repatriate. Then because imperialism is always messy, they created a ruling class amongst the repatriated, mostly African American and Caribbean, former slaves, that while participating in the same western imperialism/capitalism that enslaved us, greatly stifled the local people who were already on the land.

There is almost no way for you to go up to a modern day African and know whether they are a descendant of someone who kidnapped Africans into slavery or a descendant of someone themselves kidnapped or in other ways harmed by the slave trade. Now there are people who specifically know their heritage and you’ll find in accounts of people who know their African families sold slaves. We should absolutely accost that history and not gloss over it while allowing people to profit or be celebrated for the power they achieved on the backs of others. When we do accost it, we will realize that these people not only harmed those who became slaves, but they greatly harmed their own local communities for generations as they accumulated wealth and power over others. Essentially we need to attack capitalism, but societal we are rife with our willingness to forgive people as long as they portray and image of desirable wealth.

Plenty of people read the New Yorker account of the young woman acknowledging her Igbo ancestor who she admired and had owned slaves. I would also suggest reading Zora Neale Hurston’s Barracoon, an account of one of the last people to be brought to America as a slave from West Africa.

But the inescapable fact that stuck in my craw, was: my people had sold me and the white people had bought me. . . . It impressed upon me the universal nature of greed and glory. 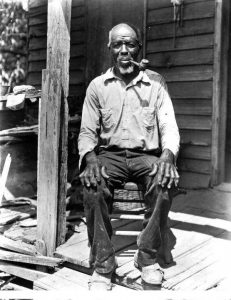 Hurston parsed through this as she interviews a survivor from the last slaves ship brought to America in 1860, Cudjo Lewis. He details a journey none of us can imagine taking after being kidnapped from his community in a part of Yorubaland that is now modern day Benin and brought to Alabama into slavery, where along with other recent African slaves post-freedom establishes the historic Africatown in the Mobile, Alabama area. You can read or listen to Hurston’s Barracoon on Audible (the audio version is very well done). The feelings I was left with were complex, but inspired me to tackle this subject. It’s reminded me that slavery is a deeply painful part of all our history within the diaspora but that it didn’t simply happen to others. There’s a way to tackle our history and be better from it rather than bitter. To be unified rather than broken.

Use can use my link: http://audible.com/jouelzy or text “jouelzy” to 500 500 and use your first month free audiobook to download Barracoon on Audible. *Audible sponsored the video attached to this post.