Retrograde is in full effect and I recorded this review with my mic off so the audio will be different. But let us get into it. Last week, I didn’t do a traditional review instead I talked about the importance of Ernestine’s storyline because it’s important very important to the narrative casted over Black women and the crackhead trope. For all intents and purposes, Ernestine is a crackhead, but the way her story is developed and how we connect to her humanity gives us a different perspective on how we have been shaped to view the “crack epidemic” and the choices of Black women.

This week we have Aisha Hinds portraying Harriet Tubman as the sole protagonist of the episode delivering a speech to a room of abolitionists in Philadelphia for the duration of the episode. It is historical, though I wonder how this held people’s attention for over an hour. The episode was just the speech. Either way Hinds overall performance as Tubman is amazing, it gives nuance and a humanness without following into the asexual mammy trope. Tubman ain’t one to be fucked with but she still has a heart that emotes deeply and pumps blood that runs red when it hits the air.

Last week’s episode, Whiteface, was especially riveting with the developments of Cato and Ernestine’s storyline. While Cato’s plot is getting deeper into the fantastical side, leaving me with a lot of questions of just how did we get here? I guess it’s the vehicle in which we get that punch of action and high drama. Somehow Cato made it barely across the Mason-Dixon and on a boat to Europe with a major bounty on his head and huge identifying scar across half his face. Then he had the nerve to come back to the States, settling down in Philadelphia amongst the abolitionist literati, still not a free man and he waste no time agitating the white folks on a grand scale. He’s right hand man forewarns him that this ain’t Europe and he can be kidnapped back into slavery. Then someone how August and that devilish white woman slave catcher make it from Ohio, across the mountains of Western Pennsylvania, into Philadelphia in time to clean up for Cato’s invite only party, where they kill all his men and take control of his house. If we must, I guess. It was very enjoyable to watch and seeing John Legend as Frederick Douglass was delightful! 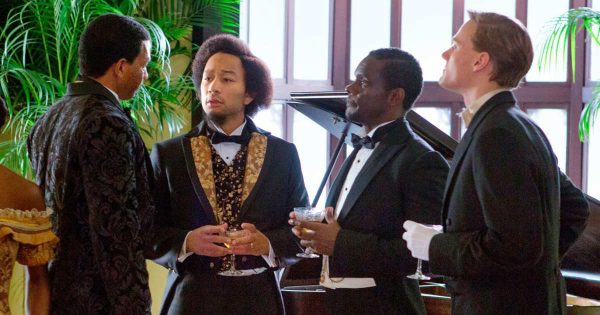 Rosalee wants Noah to go back to save her momma and brother, while she’s how many months pregnant? And they don’t know that ‘Stine has been sold on down river to the coast of Georgia. This is heart wrenching but it’s easy for us to suggest she walk away from her family but how many of us what be able to do that without serious torment? 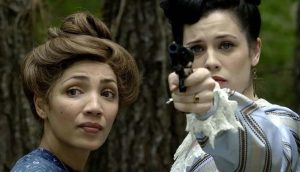 What stood out to you in the past two season? Do you have any favorite quotes from Tubman’s speech? Leave a comment down below and if this retrograde don’t stop me see you next week!