Solange’s new album is a wonderful tableaux of the simplicity, complexities, vulnerabilities and the intersections of Black women. An art piece, that sits not only in the hallway of good music but as we or they say is “sonically pleasing.” It enwraps you in an experience. A Seat At The Table is a story, were words, melodies, and layers construct a narrative that is genuine to Solange’s evolving identity, but also feels like she made the mundaneness of our everyday existence something delightfully beautiful and deep.

Solange has evolved through a barrage of criticisms that often seek to constrain her identity, and simplify her as a secondary archetype. Of the shea butter and coconut oil tribe; whimsical and conscious. Miss out if you settle into believing that’s all Solange can be.

Entreating Master P to be the voice that ties the story of A Seat At The Table together, is a paean to Black Southern culture. As a teenager of the late ‘90s in the Philadelphia area, even with the religion restricting my access to pop culture, I acutely remember the significance of the rise of rap crews like Ruff Ryders and State Property, suede cow print, shiny denim suits and all velour track suits with white Nike Air Force Ones. What’s often belittled as the gaudy shallow culture of poor Blacks, was the turning of the tragedy of oppression into the renaissance of hip hop culture. And Master P, with the success of No Limit, holds a story of understanding ones worth even as others turned their nose up and The Man attempts to commodify what they knew would be profitable. The glory of Master P being inspired by the local Avon lady, to start No Limit Records.

Solange exalted Master P and closed out the album with her and Kelala, singing praises in sotto voce to hood niggas:

Candy red things gonna spin
With that big body, boy, you’re bound to win
And that armor in your mouth
You’re gonna shine
Your wrist talking, boy, it’s only time
Put the incense on/
Cover up the smell

The comparisons to Beyonce’s Lemonade are not unfair or unwarranted. I am of the persuasion that a good bit of Bey’s wokeness has been preempted by Solange. They both released Black AF albums that are wrapped around the agency of Black women to define their identity while tapping keenly on the evolution of our emotional selves. But it’s pointless to pair them as a competition. One is not better than the other. While they start on similar grounds, they both delve off into two different arenas, with Lemonade exploring the function of self within a relationship and A Seat at the Table sticking with self as in “I”. Damn Tina did a good job. 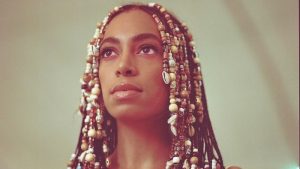 I’ve been dealing with one of my worst bouts of depression/anxiety throughout this year, a year that I summarily want to flush down the toilet.  Part of my maintaining has been to remind myself to listen to music, because that helps with productivity when I can’t find any motivation to be present. I have had Minnie Riperton’s Adventures in Paradise on repeat for the bulk of this summer. A Seat at the Table slides smoothly in as a bridge between Adventures in Paradise and Tweet’s Southern Hummingbird. With the genius of her creative wherewithal, pulls in the ‘elder’ who inspired using Tweet for background vocals, as well as sampling Aaliyah on “Where Do We Go” and “Borderline.” Dev Hynes, Sampha, Moses Sumney, Kelela and Olugbenga all contributed and are upcoming, undercover, the mainstream ain’t hip yet so you’re own one if you know artists to check out who contributed.

We most give a nod to Raphael Saadiq having that black gold magic touch in the year where Jesus’ Black life ain’t matter of 2016. Underground, Luke Cage, Insecure, Queen Sugar and now ASATT. Saadiq’s music translates well in “Cranes in the Sky”, a song that is impossible to dislike. In all the wtfness of 2016, it is beautiful to us  celebrating the mundaneness of being Black. That Atlanta explores being Black, broke and trying to get ahead. That Insecure is hilariously exploring young career minded Black women both single and somewhere between the high and the low of love, that Queen Sugar makes it look so rich in beautiful colors without convoluting high jinx storylines. That “Cranes in the Sky” was the song you didn’t even know you needed, allowing you to exhale and say give me a minute, it uncovers all the shit we hide through Instagram filters.

Folks may be quick to say Solange has a limited vocal range, but her voice is not manufactured with the inability to recreate it without the effects of auto tone and fancy audio software. Solange creates music that she can carry live, a talent when you look at the layering melodies of her songs. The in your face titling initially feels a bit simpleton but “Mad”, “FUBU” and “Don’t Touch My Hair” all are poignantly mater of fact in title, because it’s not just us consuming. Solange titled her songs explicitly so the Jon Carmanica’s of the world don’t have room to make any assumptions. Put some respect on it.

To think Solange got us all in our feels, evaluating our sense of self, reveling in the drawer of life we hoped no one would meddle through because fuck it growing and evolving hurts like hell but Solange inserted a hosanna where we only saw frustration. And she did all this without slicked down baby hairs. My sister in the frizzy edges, thank you for letting us feel you and really feel ourselves deeper.