I’ve recently relocated from Washington, DC to Houston, Texas. Really I prefer saying that I relocated from the East Coast to Houston because I grew up in Delaware and then spent most of my 20’s in Brooklyn, New York. This is all relevant to the story of my recent venture to a Nigerian restaurant in Houston. Houston, the land of oil and energy, is a very diverse city in what can often be a rather homogenous South. I am a lover of diverse culture and have spent my adulthood living in cities that I thought offered just that. It’s been very intriguing to see how they offer up their diversity in different servings. What makes Houston most different, is that it is a mini-Biafra.

Houston is the one of the largest epicenters of Nigerians outside of Nigeria. More distinctly is that the Nigerian community here is mostly of the south-east variety, Igbo people. I’ve lived in the two other American cities that host large enclaves of Nigerian expats, Washington DC and NYC. And even growing up in Delaware, the land of big banks and pharmaceutical companies (read: engineers) has a very large Yoruba/Nigerian community. But it was just different. New York City is a melting pot of  building stacks on topped of each other, where owning a car can be more of a pain than an enhancement to ones life and by default since the majority of the residents take on the MTA train on a daily basis, cross cultural integration is a lot more common. There is definitely a Nigerian community in NYC, but it’s much more intertwined with the other communities of the African diaspora then say in DC and definitely Houston. So it’s more common to meet someone who is half-Nigerian, with a Nigerian father and a Trinidadian mother (or another island varietal). Or Ghanaian-Nigerian, is pretty common. You don’t really even get into the ethnicity conversation too often, whether someone is Yoruba, Igbo, Hausa, Edo or Ijaw. Now that was definitely a conversation that was had in DC, where communities of all ethnicities are very insulated partly due to the cliquey nature of the city itself. People of the same ethnicity lived in the same part of town, went to their Nigerian church and you needed a pass to get in.

Houston sits somewhere in between the moshed mixyness of NYC and the insulated cliqueness of Washington, DC. Where you will meet plenty of 1st and 2nd generation Nigerian-American men who are members of the Alpha Phi Alpha, the first African-American fraternity. Thick Texan accents abound and general assimilation to the better nuances of the African-American community in Texas, while still being very strongly connected to whatever state their family is from. I’ve been given plenty of lessons on the difference of Enugu and Owerri. I know there’s Abia, Rivers and Cross River. None of this is really relevant to me, but it’s an almost daily topic. Oh and if you want to bag a Naija man, then you must learn to make egusi soup. So much talk of egusi soup and so this long intro is what leads us, well really Christine and I, to what is supposedly the best Nigerian restaurant in all of Houston, Trinity’s Bar & Grill.

Now, I’m not interested in picking up any guy off because of my cooking skill. But Christine, who is my Nigerian-American friend and soror (she grew up in Dallas) was with me the first time I had a variation of egusi soup, cooked by the girlfriend of a Nigerian though she herself was from Mauritius. Whatever it was that she made and I was forced to taste (egusi just doesn’t look pretty to begin with) didn’t taste too bad. It was a very familiar flavor of a mackerel and stew dish my Dad use to make. It was decent. But Christine said I needed to try the real thing. Maybe part of this has to do with every time I step out the house someone is questioning why I don’t acknowledge my Nigerian ancestry. Uhhh….sir… Apparently I look rather Igbo, but from what I gather so does every light-skin Black chick with big cheeks and full lips. I’m something different in every city that I travel to, so this just replaces people coming up to me and randomly starting to speak Spanish or folks asking me if I’m East African (I do not get that one at all). So here we are with Christine treating to a meal of pepper soup, egusi soup, okra soup, and jollof. 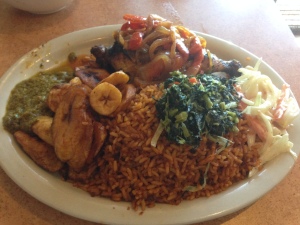 Let’s just get to the point, I didn’t like much of anything that was set on the table at Trinity. That doesn’t mean I’ve entirely given up on Nigerian food. But I’m leaning towards just passing up on all the soups….cause….like…no….for why…..I just….can’t. I’m not a big fish eater. I prefer my fish fried in a light batter if I must and there is a real thing of food having too fishy of a taste. I like salmon in any variety, tuna is cool and shrimp. Oh, I do love catfish. I’ll pass on tilapia tho.  So the first problem with Trinity was them being out of quite a few things on their menu in the middle of the day on Sunday. No suya, a spicy kebab, and no goat meat. Which meant the pepper soup had to come with fish. Now I don’t believe that big block of fish with the skin on top was catfish. It didn’t smell anything like the catfish that I like to fire, girl or blacken. It stank something bad and smelled sourly fishy. Then the egusi came, which Christine had ordered for herself as I had ordered the jollof with chicken. The egusi was very bitter and Christine sent it back with one waitress telling us that she never eats egusi outside of her home. Welp, what sage advice. Christine swapped it out for okra soup. I already knew I wasn’t going to be a fan of that. Okra walks a very fine line in being palatable for me. My dad makes an okra stew, but never allows the okra to get slimy and it’s still not my favorite dish. What Christine was severed was a bowl of slime. She ate a bit of it. But we both tore down on my plate of jollof with chicken, spinach, plantain and pepper sauce. Now that was all good and divine.

A posted a vlog of the whole experience on my vlog channel, The Jouel Life (subscribe!) and it seems that the general consensus is that not everyone is here for the soups and either way you should really stick to eating Nigerian food at the house of a Nigerian. Going to a restaurant is almost always a guaranteed fail. Welp, I tried, I learned. Maybe there will be another time. 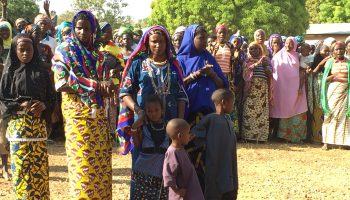